Considering the millions of people who travel via the New York City subway system every day, it is not surprising that about a dozen people are injured each day on subway trains, platforms and stations.

Many injuries occur in train accidents, such as derailments, collisions, or abruptly stopping and starting or lurching. Other injuries are caused by falls, including falls from a subway platform onto tracks or a slip-and-fall accident on a train, or a station stairway. In many cases, a person slips and their foot or leg becomes lodged in the gap between the platform and the train.

New York’s Metropolitan Transportation Authority (MTA) has a responsibility for the safety of passengers who ride subway trains and use subway stations. When a subway accident occurs, the people who are injured, or the families of those who die in fatal accidents, may seek compensation for their losses.

The New York City injury attorneys of Hecht Kleeger & Damashek, P.C., investigate subway accidents on behalf of injured passengers and their families. If a subway accident is the result of negligence of the MTA or an MTA employee, we can help you to pursue legal action against the responsible parties.

If you have been injured in a subway accident, you are not alone. As of December 31, 2013, MTA New York City Transit and the Manhattan and Bronx Surface Transportation Operating Authority (MaBSTOA, the bus system) had 8,411 personal injury claims and lawsuits and 2,700 property damage claims pending against them because of the operation and administration of the Transit System.

Subway injuries may be caused by many factors. They include:

Some NYC subway system accidents are big news. Recent examples include train derailments on the Metro-North line at Bridgeport, CT, in May 2013 and at Spuyten Duyvil, NY, in December 2013, which collectively caused four deaths and 196 injuries. Investigations indicated that driver error as well as negligence in track maintenance contributed to these accidents.

Other injuries, such as those caused by falls or criminal assault, happen daily and get much less publicity. The Metropolitan Transportation Authority (MTA) in its 2013 performance report says 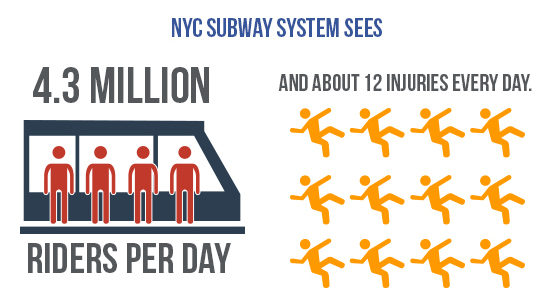 About 758 times a year, a New York subway system customer is subjected to a major felony (murder, rape, felonious assault) and about 200 times a year a subway passenger is robbed, according to the MTA.

A study of subway system accidents and injuries based on MTA records obtained by the Gothamist website found that accidents tend to happen at certain stations, and that Manhattan stations generally see more fatalities and injuries than stations in outer boroughs.

Some stations cited as having a high incidence of accident and injury (including suicides), include:

Compensation for Your Subway Accident Losses

Major subway accidents in New York are investigated by the National Transportation Safety Board (NTSB) and the Federal Railroad Administration (FRA), and by MTA personnel. In other cases, the MTA police will investigate. But it is usually necessary to conduct an independent investigation of a subway accident to determine exactly what happened and which parties should be held accountable.

The railroad accident attorneys of Hecht Kleeger & Damashek investigate subway accidents that occur within the New York City Metro system. We do the legwork necessary to collect evidence from the scene and from witnesses, and we know how to collect and analyze technical data associated with accidents that involve train operations and maintenance, track maintenance or design, communication systems, defective parts and faulty electrical systems.

When necessary, we call upon the expertise of a network of forensic specialists and accident reconstruction engineers to prepare analytical reports or serve as expert witnesses.

When we identify negligence in a subway accident, our firm can proceed with pursuit of a claim with the knowledge and skill that comes from more than 75 years of combined experience among our attorneys. Whether we can settle a case through negotiation or must go to court, our goal is to obtain the highest possible cash award for each client. Depending on the circumstances of your case, this may include money for:

If you believe you have a valid subway accident claim against the New York Metropolitan Transportation Authority, get the help of an experienced legal team that has the resources to ensure you have a sound case that moves forward without delay. Hecht Kleeger & Damashek, P.C., will respond to your needs quickly and work your case on a contingency-fee basis. Our clients pay no fees up front and, if we do not obtain a settlement or court award, pay no legal fees at all.

Please contact Hecht Kleeger & Damashek, P.C., for a free, no obligation initial consultation about your case. The time to get started is today.